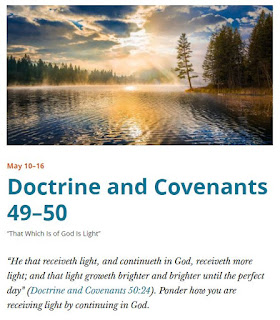 This lesson provides a model for missionary and activation work. There is a lot of important doctrine in these sections, and the historical context makes it all the more interesting.

The specific situation involved a religious community in Ohio commonly called the Shakers. The introduction to D&C 49 summarizes the situation.

Revelation given through Joseph Smith the Prophet to Sidney Rigdon, Parley P. Pratt, and Leman Copley, at Kirtland, Ohio, May 7, 1831.

[These men were called as missionaries to the Shakers.]

Leman Copley had embraced the gospel but still held to some of the teachings of the Shakers (United Society of Believers in Christ’s Second Appearing), to which he had formerly belonged.

[Ann Lee lived from 1736 to 1784. She was born in England but died in Watervliet, New York, which was about 200 miles east of Palmyra. She was mentioned twice in the Messenger and Advocate and three times in the Times and Seasons. Sidney Rigdon wrote, "The disciples of Ann Lee, Joanah Southcoat, the French Prophets, Jemimah Willkeson, Hull Barton, Matthias, Alexander Campbell, Walter Scott, or Methodist, Baptist, Presbyterian or any other, are all alike, as far as their salvation is concerned one is just as near eternal life as the other. It is the gift of the Holy Ghost as administered by the apostles, by the laying on of hands, which makes the difference, and it is this alone, and the society which has this power are the people of God and those who have not are not.

They did not consider baptism by water essential. [Verse 13 emphasizes the importance of baptism]

They rejected marriage and believed in a life of total celibacy. [Verses 15-17 emphasizes the importance of marriage and family.]

Some Shakers also forbade the eating of meat. [Verses 18-21 explain that God does not forbit eating meat, although it should not be wasted.]

In prefacing this revelation, Joseph Smith’s history states, “In order to have [a] more perfect understanding on the subject, I inquired of the Lord, and received the following.” The revelation refutes some of the basic concepts of the Shaker group.

The aforementioned brethren took a copy of the revelation to the Shaker community (near Cleveland, Ohio) and read it to them in its entirety, but it was rejected.

For a good discussion of the Shakers, see Leman Copley and the Shakers (churchofjesuschrist.org)

In 1979, the Ensign published a photographic tour of Church history sites. The photos are interesting to compare to today's restored sites.
https://www.churchofjesuschrist.org/study/ensign/1979/01/the-way-it-looks-today-a-camera-tour-of-church-history-sites-in-the-kirtland-neighborhood?lang=eng 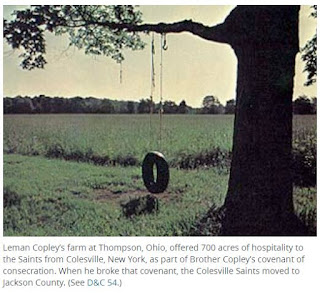 There are also some useful photos on the Church's website here:
https://www.deseret.com/2014/12/24/20555315/picturing-history-thompson-ohio#a-recent-convert-to-the-church-of-jesus-christ-of-latter-day-saints-leman-copley-owned-over-700-acres-of-land-that-was-then-in-thompson-ohio-these-images-show-land-that-copley-owned-including-the-cemetery-where-he-and-his-wife-are-buried
Section 49 emphasizes some key future events to keep us from being deceived:
23 Wherefore, be not deceived, but continue in steadfastness, looking forth for the heavens to be shaken, and the earth to tremble and to reel to and fro as a drunken man, and for the valleys to be exalted, and for the mountains to be made low, and for the rough places to become smooth—and all this when the angel shall sound his trumpet.
24 But before the great day of the Lord shall come, Jacob shall flourish in the wilderness, and the Lamanites shall blossom as the rose.
25 Zion shall flourish upon the hills and rejoice upon the mountains, and shall be assembled together unto the place which I have appointed.
26 Behold, I say unto you, go forth as I have commanded you; repent of all your sins; ask and ye shall receive; knock and it shall be opened unto you.
27 Behold, I will go before you and be your rearward; and I will be in your midst, and you shall not be confounded.
28 Behold, I am Jesus Christ, and I come quickly. Even so. Amen.
(Doctrine and Covenants 49:23–28)
_____
Section 50 expands on D&C 46, which listed the gifts of the Spirit. Here, the Lord explains how to tell if a manifestation is from the Spirit of truth or not.
21 Therefore, why is it that ye cannot understand and know, that he that receiveth the word by the Spirit of truth receiveth it as it is preached by the Spirit of truth?
22 Wherefore, he that preacheth and he that receiveth, understand one another, and both are edified and rejoice together.
23 And that which doth not edify is not of God, and is darkness.
24 That which is of God is light; and he that receiveth light, and continueth in God, receiveth more light; and that light groweth brighter and brighter until the perfect day.
(Doctrine and Covenants 50:21–24)
The principle of growing in light is also demonstrated by the opposite effect, as taught in Alma 12:9.
When we accept what the Lord gives us, we are given a greater portion of the word, until we know everything.
When we don't accept what the Lord gives us, we get less until we know nothing.
9 And now Alma began to expound these things unto him, saying: It is given unto many to know the mysteries of God; nevertheless they are laid under a strict command that they shall not impart only according to the portion of his word which he doth grant unto the children of men, according to the heed and diligence which they give unto him.
10 And therefore, he that will harden his heart, the same receiveth the lesser portion of the word; and he that will not harden his heart, to him is given the greater portion of the word, until it is given unto him to know the mysteries of God until he know them in full.
11 And they that will harden their hearts, to them is given the lesser portion of the word until they know nothing concerning his mysteries; and then they are taken captive by the devil, and led by his will down to destruction. Now this is what is meant by the chains of hell.
(Alma 12:9–11)
Two areas of confusion among many Latter-day Saints today reflect this principle. Those who accept what Joseph and Oliver taught about the translation--that Joseph translated the engravings on the plates by means of the Urim and Thummim--are not confused. Those who reject what Joseph and Oliver said, however, face a variety of alternative explanations, ranging from a "stone-in-the-hat" to a purely visionary experience to a composition or performance.
Those who accept what Joseph and Oliver taught about the New York Cumorah likewise express confusion about the historicity of the Book of Mormon. There are Latter-day Saints who, having rejected the New York Cumorah, find their own "hill Cumorah" in many parts of the world. Some, having rejected the New York Cumorah, reject the historicity of the Book of Mormon altogether.
_____
In 1992, Robert L. Millet, then Dean of Religious Education at BYU, gave an important lecture about BYU as a covenant community. He observed an important aspect of missionary work.

President Joseph F. Smith, in writing to one of his missionary sons, explained:

Kindness will beget friendship and favor, but anger or passion will drive away sympathy. To win one's respect and confidence, approach him mildly, kindly. No friendship was ever gained by an attack upon principle or upon man, but by calm reason and the lowly Spirit of Truth.

If you have built for a man a better house than his own, and he is willing to accept yours and forsake his, then, and not till then, should you proceed to tear down the old structure. Rotten though it may be it will require some time for it to lose all its charms and fond memories of its former occupant. Therefore let him, not you, proceed to tear it away. Kindness and courtesy are the primal elements of gentility. (Letter of 18 May 1896 to Hyrum M. Smith, in From Prophet to Son, pp. 42-43, emphasis added.)