Me studying the scriptures on the Isle of Patmos, Greece. 2021 is the year we (members of the Church of Jesus Christ of Latter-day Saints) focus on the Doctrine and Covenants and Church history. As the Lord said in Section 1: 37 Search these commandments, for they are true and faithful, and the prophecies and promises which are in them shall all be fulfilled. 38 What I the Lord have spoken, I have spoken, and I excuse not myself; and though the heavens and the earth pass away, my word shall not pass away, but shall all be fulfilled, whether by mine own voice or by the voice of my servants, it is the same. (Doctrine and Covenants 1:37–38) On this blog (and in the linked podcasts), I'll offer some insights you won't get anywhere else, along with supporting links and references. I'm sharing things that have helped me better understand the scriptures, and especially the credibility and reliability of Joseph Smith and Oliver Cowdery. Over a year ago, my publisher challenged me t
Post a Comment
Read more 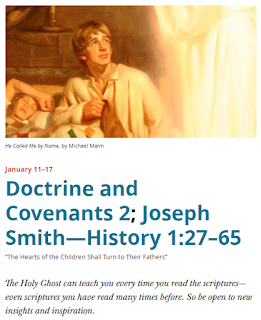 This lesson focuses on Moroni's visit as recounted in JS-H 1:27-65. JS-H has generated some confusion that we can resolve by considering earlier published accounts of Church history. The confusion involves (i) the identity of Moroni, (ii) the identity of the Lamanites, and (iii) the identity of Cumorah. I'll discuss these in the next section below. JS-H is an edited version of the history that was originally published in the Times and Seasons  as a series of articles titled "History of Joseph Smith." Moroni's visit was published on April 15, 1842 (Vol. III, No. 12, page 753).  You can see this here: https://www.josephsmithpapers.org/paper-summary/times-and-seasons-15-april-1842/3 and here:  http://www.centerplace.org/history/ts/v3n12.htm To avoid confusion (discussed in the next section below), it is important to consider two aspects of JS-H. (i) it is an edited version of the original History of Joseph Smith. (ii) it discusses some things in more detail than pr
Post a Comment
Read more 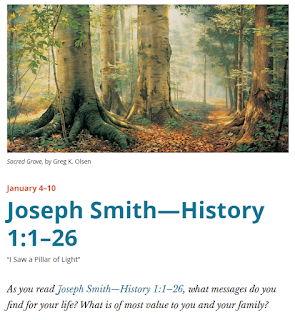 This lesson focuses on Joseph Smith's first vision and the events leading up to it. Joseph's family was deeply religious. His parents had regular family prayer and scripture study, which led Joseph to wonder about the state of his own soul. Unlike missionaries today, early missionaries did not focus much on the first vision. Instead, they preached from the Bible and the Book of Mormon. Historian Richard Bushman has pointed out that in the early 1800s, lots of people claimed to have visions, so Joseph's experience would not be all that unusual. That makes sense to me. Another question that people ask is why Joseph and Oliver didn't include the first vision in the eight essays on Church history they wrote and published in 1834-5. The essays describe Joseph's concern about the welfare of his soul and his prayer, but instead of the first vision, they relate Moroni's first visit. From our perspective today, this would have been an ideal time for Joseph to set out t
Post a Comment
Read more 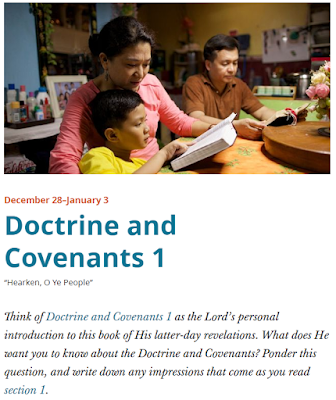 As the designated preface for the Doctrine and Covenants, Section 1 deserves a great deal of attention. You and I could write an entire post about each verse.  Time constraints force us to focus.  The Lord explains that he gave these commandments (a synonym for scriptures in this context) for specific reasons, including this: That faith also might increase in the earth; (Doctrine and Covenants 1:21) In our day, there are innumerable challenges to our faith, both from without and within the Church. There have always been critics who opposed the work, but now we have scholars who are trying to persuade the Latter-day Saints that Joseph Smith never really translated anything, that he never used the plates but instead he merely read words that appeared on a seer stone he put in a hat, etc.   D&C 1 addresses these attacks on faith directly. It includes two key passages that tell us about: 1. The translation of the Book of Mormon. 2. The truthfulness of the revelations. _____ Behold, I a
1 comment
Read more

jonathan3d
I blog about LDS topics from a faithful perspective, although I disagree with much of what LDS intellectuals teach. I also blog about science, art, economics, legal and environmental issues. I've lived in Europe, Asia, Africa, and North America and I've visited every continent and over 65 countries for work and fun. I've had over 50 books published. The photo is me on a plane in 2020.