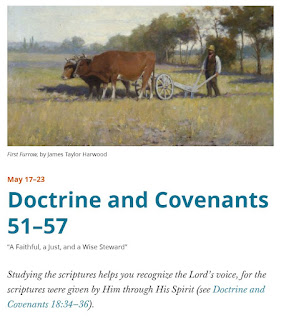 This week covers seven sections received in Kirtland, Ohio, in May and June, 1831. When we study these sections in historical context, we can see how reading the D&C in light of the Book of Mormon tells us a lot about the Book of Mormon.
We see why, when people take tours of Church history sites, they are also taking tours of Book of Mormon sites.
_____

During these months, the Saints from Colesville, New York, arrived in the Kirtland area. Leman Copley initially allowed them to settle on his farm in Thompson, but he later reneged and the Colesville Saints asked Joseph what they should do.

The Lord instructed these Saints to move to Missouri. This required tremendous faith on their part.

They had responded to the commandment to sell everything in Colesville and move to Ohio, which was disruptive enough, but now they had to move another thousand miles west to the frontier, to the "borders of the Lamanites."

In so doing, they were cautioned to "be patient in tribulation," thereby alerting them that their sojourn in Missouri would not be peaceful. (D&C 54:7-10)

Some years ago we visited Colesville and I took some photos of the Joseph Knight home where the Colesville members met. (click to enlarge) 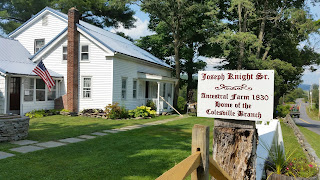 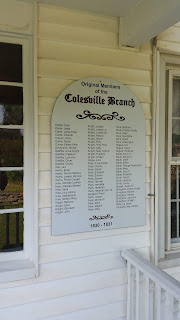 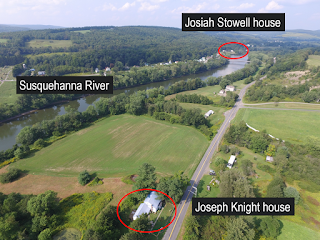 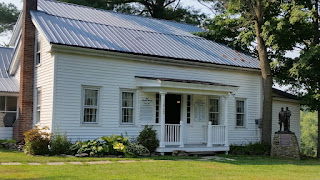 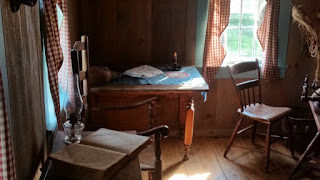 The Colesville Saints left their homes for Ohio, as you can see on this map. 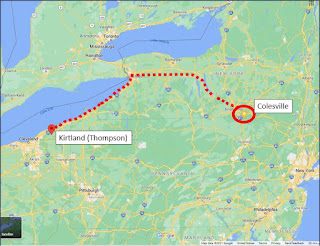 The revelations in these sections are profound on their own, but when understood in the context of the times, they give us perspective to help us more deeply appreciate their significance. In the context of moving their households and families to unknown frontier areas, the Lord instructed these early Saints about how to regulate stewardships and how to care for "the poor and needy, the sick and the afflicted."

The Joseph Smith Papers includes a series of useful maps, which you can see here:

If you go there, you'll find these maps.

Notice how similar the two in the middle are. These are the so-called Mission to the Indians, which was actually the mission to the Lamanites. Notice in the description, the editors of the Joseph Smith Papers put the term "Lamanites" in scare quotations because they are reframing the history. The revelations in the D&C use the term Lamanites, not Indians. Joseph Smith and his contemporaries were completely familiar with the term "Indians" but that's not the term the Lord used in these revelations. 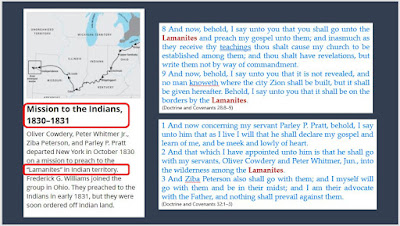 This brings up an interesting point about the sections in this week's Come Follow Me lesson. Notice in section 54:8 that the Lord refers to Missouri as the "borders of the Lamanites." 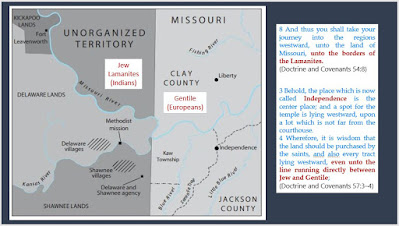 Two important things to notice here. First, the phrase "borders of the Lamanites" appears only twice in all the scriptures. You can see this in Wordcruncher. 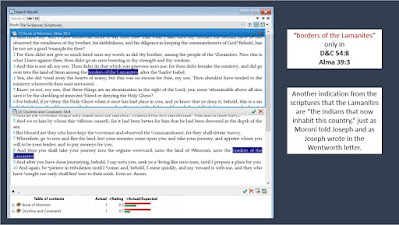 This is another indication from the scriptures that the modern Lamanites, the remnant of Lehi, are "the Indians that now inhabit this country," just as Moroni told Joseph Smith and as Joseph wrote in the Wentworth letter.

When we look at the map of the travels between Kirtland and Independence, we can see how many significant ruins left by the "Moundbuilders" they passed. It's fun to also see all the modern temples in the area. 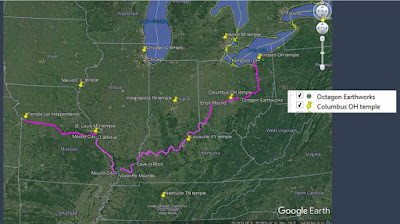 Finally, the heading to Section 57 explains that when the Saints arrived in Missouri, "Joseph Smith contemplated the state of the Lamanites and wondered: “When will the wilderness blossom as the rose? When will Zion be built up in her glory, and where will Thy temple stand, unto which all nations shall come in the last days?” Subsequently he received this revelation."

Despite all of this obvious connection between the Lamanites and the "Indians that now inhabit this country," some Latter-day Saints wonder who the Lamanites are today.

There are some helpful maps and explanations of Church history in the area of Missouri at this link:

Many people have visited these historic sites in recent years. The Church has done tremendous restoration work to help us understand and visualize the historic events that took place in these locations.
I found an Ensign article from 1979 that shows how the sites looked before they were restored.
https://www.churchofjesuschrist.org/study/ensign/1979/01/the-way-it-looks-today-a-camera-tour-of-church-history-sites-in-the-kirtland-neighborhood?lang=eng
The Deseret News also has a series titled "Picturing History" that includes the Leman Copley farm.
https://www.deseret.com/2014/12/24/20555315/picturing-history-thompson-ohio#a-recent-convert-to-the-church-of-jesus-christ-of-latter-day-saints-leman-copley-owned-over-700-acres-of-land-that-was-then-in-thompson-ohio-these-images-show-land-that-copley-owned-including-the-cemetery-where-he-and-his-wife-are-buried
_____
These sections are full of awesome teachings and insights. Let's look at a few.
9 And let them journey from thence preaching the word by the way, saying none other things than that which the prophets and apostles have written, and that which is taught them by the Comforter through the prayer of faith. (D&C 52:9)
Here we see the importance of sticking with what the prophets and apostles have written, along with what the Comforter teaches us, or prompts us to say.
So far, we haven't seen anyplace in the Doctrine and Covenants where the Lord instructs us to teach what scholars and intellectuals say, or to follow them instead of the prophets and apostles.
33 Yea, verily I say, let all these take their journey unto one place, in their several courses, and one man shall not build upon another’s foundation, neither journey in another’s track. (D&C 52:33)
This simple instruction about moving to Missouri is full of meaning for each of us in our mortal journey. We're all heading to one place, but we each have our "several courses" that we take to get there. We also don't build on another's foundation because we are responsible to build our own foundation. We can't "journey in another's track" because we each have our own journey and life lessons to learn.
But regardless of our individual course, foundation, and track, "He that is faithful, the same shall be kept and blessed with much fruit." (D&C 52:34)
To use President Nelson's terminology, "lazy learners" like to rely on the foundations built by whichever scholars they prefer. They journey in the courses and tracks set out for them by the scholars. However, "engaged learners" study for themselves, create their own foundations and pursue their own courses and tracks.
The Lord also emphasized that whatever course or track we're on, we must "remember in all things the poor and the needy, the sick and the afflicted, for he that doeth not these things, the same is not my disciple." (D&C 52:40)
Along these lines, let's end with this passage, which emphasizes the point of establishing Zion. I discuss these principles each week in the How to Zion blog:
https://howtozion.blogspot.com/2021/04/thou-wilt-remember-poor.html
14 Behold, thus saith the Lord unto my people—you have many things to do and to repent of; for behold, your sins have come up unto me, and are not pardoned, because you seek to counsel in your own ways.
15 And your hearts are not satisfied. And ye obey not the truth, but have pleasure in unrighteousness.
16 Wo unto you rich men, that will not give your substance to the poor, for your riches will canker your souls; and this shall be your lamentation in the day of visitation, and of judgment, and of indignation: The harvest is past, the summer is ended, and my soul is not saved!
17 Wo unto you poor men, whose hearts are not broken, whose spirits are not contrite, and whose bellies are not satisfied, and whose hands are not stayed from laying hold upon other men’s goods, whose eyes are full of greediness, and who will not labor with your own hands!
18 But blessed are the poor who are pure in heart, whose hearts are broken, and whose spirits are contrite, for they shall see the kingdom of God coming in power and great glory unto their deliverance; for the fatness of the earth shall be theirs.
19 For behold, the Lord shall come, and his recompense shall be with him, and he shall reward every man, and the poor shall rejoice;
20 And their generations shall inherit the earth from generation to generation, forever and ever.
(Doctrine and Covenants 56:14–20)