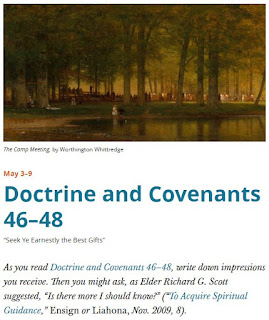 As part of their mission to the Lamanites, Oliver Cowdery, Parley P. Pratt, Peter Whitmer Jr., and Ziba Peterson passed through northeastern Ohio on their way to Missouri.

The Revelations in Context book explains one of the reasons why the missionaries were successful in Ohio:

In the early part of November 1830, [Levi] Hancock’s brother Alvah brought him word of the Book of Mormon: “Four men have come and have brought a book with them that they call [a] history and a record of the people that once inhabited this land.”

Who were the people who once inhabited Ohio?

The Book of Mormon identifies them as Jaredites and Nephites. Modern archaeologists refer to them as Adena and Hopewell civilizations.

Naturally, a history of the otherwise unknown "moundbuilders" would be of great interest to people living in Ohio among the mounds. Once he heard these men had this history, he wanted to know more.

His interest stirred, Hancock expressed a desire to hear these preachers. “Tomorrow they are to hold a meeting at Mr. Jackson’s in Mayfield,” his brother said, adding, “They lay hands on those they baptize and bestow on them the Holy Ghost.”

Hancock described his reaction: “At these last words … there seemed to fall on me something pleasant and delightful[.] It seemed like a wash of something warm took me in the face and ran over my body which gave me that feeling I cannot describe. The first word I said was, ‘It is the truth, I can feel it. I will go and hear for myself tomorrow.’”

Parley P. Pratt recorded that the missionaries explained to people that

This Book, which contained these things, was hid in the earth by Moroni, in a hill called by him Cumorah, which hill is now in the state of New York, near the village of Palmyra, in Ontario County. (Autobiography of P.P. Pratt p 56-61)

[For more such references, see http://www.lettervii.com/2016/08/guest-post-one-cumorah-historical.html]

In our day, the historicity of the Book of Mormon is just as important to nonmembers as it was in the early days of the Church. People naturally want to know whether the Book of Mormon relates an actual history, and if so, where the events took place.

Once people have reason to believe in the divine authenticity of the Book of Mormon, they are receptive to its message.

The missionaries to the Lamanites converted around 100 people in Kirtland, but they moved on. The manual notes:

As Parley P. Pratt, Oliver Cowdery, Ziba Peterson, and Peter Whitmer Jr. left Kirtland and moved on to other fields of labor, they left over one hundred converts who had plenty of zeal but little experience or direction. There were no instructional handbooks, no leadership training meetings, no broadcasts of general conference—in fact, there weren’t even very many copies of the Book of Mormon to go around.

Of course, they had printed 5,000 copies in Palmyra. They weren't all bound at once because binding was expensive. Joseph and his contemporaries handed out some of the sheets before the books were bound.

The converts in Ohio didn't have many copies because the four missionaries couldn't carry very many copies with them on their mission. The lesson kind of conflates that problem with the later arrival of Joseph and the others from New York, when they brought the copies with them. They weren't able to sell many copies at first. That's why Martin lost the farm. They had so many available that they didn't print more copies until 1837 in Kirtland.

When I was a freshman at BYU, we were in the 46th Ward. We had a ward hymn based on D&C 46 titled "To Some 'tis Given" that I've never forgotten. Bruce Christensen mentioned our ward in his thoughtful article, here:

It was one of the best hymns I've ever heard, and I wish it was in the hymnbook. Maybe it will be in the new hymnbook?

"We'll serve him through

the least of these,

And in His name

by living one for another."

The music is highly memorable. I can still sing the entire thing, even though I haven't heard it in decades.

D&C 46 discusses the gifts of the Spirit, similar to the way Moroni 10 does.

The introduction to D&C 46 explains the background.

Revelation given through Joseph Smith the Prophet to the Church, at Kirtland, Ohio, March 8, 1831. In this early time of the Church, a unified pattern for the conducting of Church services had not yet developed. However, a custom of admitting only members and earnest investigators to the sacrament meetings and other assemblies of the Church had become somewhat general. This revelation expresses the will of the Lord relative to governing and conducting meetings and His direction on seeking and discerning the gifts of the Spirit.

The Lord explains that it is easy to be deceived in spiritual things. We need to be wary.
8 Wherefore, beware lest ye are deceived; and that ye may not be deceived seek ye earnestly the best gifts, always remembering for what they are given;
9 For verily I say unto you, they are given for the benefit of those who love me and keep all my commandments, and him that seeketh so to do; that all may be benefited that seek or that ask of me, that ask and not for a sign that they may consume it upon their lusts.
10 And again, verily I say unto you, I would that ye should always remember, and always retain in your minds what those gifts are, that are given unto the church.
(Doctrine and Covenants 46:8–10)
When we think of the Saints in Ohio in the early 1830s, they didn't have copies of these revelations, but they did have the Book of Mormon. They could "always remember" these gifts by referring to Moroni 10.
We're all familiar with Moron 10:4-5, but we don't often hear about verses 6-19. In my view, Moroni there tells us all the ways by which we can know the truth by the power of the Holy Ghost. The Spirit does not work solely through spiritual promptings.
Moroni explained, And there are different ways that these gifts are administered; but it is the same God who worketh all in all; and they are given by the manifestations of the Spirit of God unto men, to profit them.
(Moroni 10:8)
The Spirit can manifest truth by the word of wisdom, the word of knowledge, and exceedingly great faith.
Because not everyone has each gift, we can see that people can learn truth in different ways. The example of the missionaries to the Lamanites, who attracted the attention of the people in Ohio (as well as the Indians) by explaining the Book of Mormon was a history of the ancient people who lived in that area, should teach us that the divine authenticity of the Book of Mormon is one of the important ways for people to learn truth.