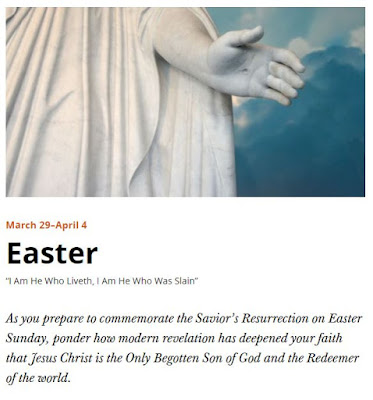 The Book of Mormon and the experiences of Joseph Smith and Oliver Cowdery (especially in the Kirtland temple) affirm the reality--the historicity--of the resurrection of Jesus Christ.

There is no more important message in the world than "He is Risen."

The fundamental principles of our religion is the testimony of the apostles and prophets concerning Jesus Christ, “that he died, was buried, and rose again the third day, and ascended up into heaven;” and all other things are only appendages to these, which pertain to our religion.

Historicity--historical authenticity-- is a  critical prelude to faith.

A thoughtful article by Bishop Robert Barron of the Archdiocese of Los Angeles, published in the Wall St. Journal, points out the difference between historicity and mythology.

Especially today, it is imperative that Christians recover the sheer strangeness of the Resurrection of Jesus and stand athwart all attempts to domesticate it [meaning to rationalize away the historicity of the resurrection]....

Another strategy of domestication, employed by thinkers from the 19th century to today, is to reduce the Resurrection of Jesus to a myth or an archetype. There are numberless stories of dying and rising gods in the mythologies of the world, and the narrative of Jesus’ death and resurrection can look like just one more iteration of the pattern. Like those of Dionysus, Osiris, Adonis and Persephone, the “resurrection” of Jesus is, on this reading, a symbolic evocation of the cycle of nature. In a Jungian psychological framework, the story of Jesus dying and coming back to life is an instance of the classic hero’s journey from order through chaos to greater order.

The problem with these modes of explanation was well articulated by C.S. Lewis: Those who think that the New Testament is a myth just haven’t read many myths. Precisely because they have to do with timeless verities and the great natural and psychological constants, mythic narratives are situated “once upon a time,” or to bring things up to date, “a long time ago, in a galaxy far, far away.” No one wonders who was Pharaoh during Osiris’s time or during which era of Greek history Heracles performed his labors, for these tales are not historically specific.

But the Gospel writers are keen to tell us that Jesus’ birth, for instance, took place while Quirinius was governor of Syria and Augustus the Emperor of Rome—that is to say, at a definite moment of history and in reference to readily identifiable figures. The Nicene Creed, recited regularly by Catholics and Orthodox Christians as part of their Sunday worship, states that Jesus was “crucified under Pontius Pilate,” a Roman official whose image is stamped on coins that we can examine today.

For believers ever since, if the crucified and risen Jesus is divine, there is a moral imperative to make him unambiguously the center of our lives. But we also have the assurance that God has not given up on the human project, that God intends fully to save us, body and soul. One of the favorite phrases in the writings of the Fathers of the Church is Deus fit homo ut homo fieret Deus, which means, God became man that man might become God. No religion or philosophy has ever proclaimed a more radical humanism than that.