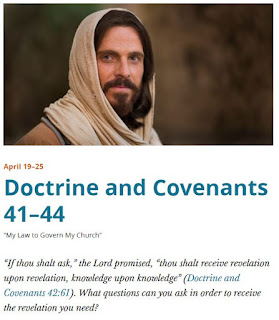 These sections contain some of the most profound teachings in the D&C, as I'm sure you already know. We'll look at a few specifically below.
First, I like reviewing the historical background to D&C 41 as presented by the Joseph Smith Papers. The part in bold below is especially significant.
Revelation, 4 February 1831 [D&C 41], Page 61 (josephsmithpapers.org)
This revelation was dictated the same day JS arrived in
Kirtland
, Ohio, from
New
York
.
1
According to
John Whitmer
’s headnote, inscribed a few months later in spring 1831, the revelation was a response to JS’s prayer regarding an offer made by new convert
Leman Copley
to provide JS and
Sidney Rigdon
“houses & provisions” on his farm in
Thompson Township
, Ohio, about twenty miles east of
Kirtland.
2
JS and his family were in need of housing because of their recent move, and Sidney and Phebe Rigdon had lost a house apparently being built for them by his former Campbellite congregation in nearby
Mentor
, Ohio, when he converted to the Church of Christ.
3
Early published versions of this revelation did not include Whitmer’s headnote,
4
and in their later histories neither JS nor Whitmer connected Copley’s offer to this revelation. Both histories instead place the revelation in the context of concerns about religious excesses among the new church members in
Ohio
. The revelation, however, does not explicitly address this matter.
In setting the scene for the revelation,
John Whitmer
wrote in his history: “About these days Joseph the Prophet and
Sidney [Rigdon]
arrived at
Kirtland
to the joy and satisfaction of the Saints. The disciples had all things common, and were going to destruction very fast as to temporal things: for they considered from reading the
scripture
that what belonged to a brother belonged to any of the brethren, therefore they would take each others clothes and other property and use it without leave: which brought on confusion and disappointments: for they did not understand the scripture. After Joseph lived here a few days the word of the Lord came.”
5
JS’s history gave a similar introduction: “The branch of the church in this part of the Lord’s vineyard, which had increased to nearly one hundred members, were striving to do the will of God, so far as they knew it; though some strange notions and false spirits had crept in among them. With a little caution, and some wisdom, I soon assisted the brethren and sisters to overcome them. The plan of ‘common stock,’ which had existed in what was called ‘the family,’ whose members generally had embraced the ever lasting gospel, was readily abandoned for the more perfect law of the Lord: and the false spirits were easily discerned and rejected by the light of revelation.”
6
...
John Whitmer
’s headnote in Revelation Book 1 listed another purpose for this revelation: “pointing at [out] the office of
Edward [Partridge]
,” who the revelation commanded to be
ordained
as the church’s first
bishop
. This is the first extant document that uses bishop as an office in the church. JS first met
Ohio
businessman and hatter Edward Partridge in December 1830 in
Fayette
, New York. Partridge had accompanied recent convert
Sidney Rigdon
on a trip to
New York
to meet JS. On 9 December, JS dictated a revelation calling Partridge to “preach my Gospel as with the voice of a Trump,” and Partridge was
baptized
by JS two days later.
9
Partridge spent the next month and a half sharing his new faith with relatives and friends in Pittsfield, Massachusetts, an effort that his daughter Emily later characterized as unsuccessful.
10
He returned to
New York
from
Massachusetts
in time to join JS,
Emma
, and Sidney Rigdon in their move to Ohio during the last week of January 1831.
11

This historical context is a good example of how people, no matter how well intentioned, cannot devise economic systems that produce a Zion society. To do that requires guidance from God and a changed heart.

The three verses below could each support an entire chapter in a book. There is a popular movement in the Church toward universalism, but these verses are difficult to reconcile with universalism.

45 Thou shalt live together in love, insomuch that thou shalt weep for the loss of them that die, and more especially for those that have not hope of a glorious resurrection.

46 And it shall come to pass that those that die in me shall not taste of death, for it shall be sweet unto them;

47 And they that die not in me, wo unto them, for their death is bitter.

This verse anticipates the subsequent revelations that encourage us to "seek learning, even by study and also by faith." (Doctrine and Covenants 88:118) We can ask and receive revelation (learning by faith) and knowledge (learning by study). I keep a book on my desk titled The Pleasure of Finding Things Out. It's sort of my motto for continual learning.
61 If thou shalt ask, thou shalt receive revelation upon revelation, knowledge upon knowledge, that thou mayest know the mysteries and peaceable things—that which bringeth joy, that which bringeth life eternal. (Doctrine and Covenants 42:61)
The next verse is one which prompted me to write my short novel, Before the World Finds Out.

65 Behold, thou shalt observe all these things, and great shall be thy reward; for unto you it is given to know the mysteries of the kingdom, but unto the world it is not given to know them. (Doctrine and Covenants 42:65)

Here we see the Lord reiterating the passage in James that prompted Joseph Smith in the first place.

68 Therefore, he that lacketh wisdom, let him ask of me, and I will give him liberally and upbraid him not. (Doctrine and Covenants 42:68)
The next passage is an important point when we're tempted to follow the scholars instead of the prophets.
5 And this shall be a law unto you, that ye receive not the teachings of any that shall come before you as revelations or commandments;
6 And this I give unto you that you may not be deceived, that you may know they are not of me.
7 For verily I say unto you, that he that is ordained of me shall come in at the gate and be ordained as I have told you before, to teach those revelations which you have received and shall receive through him whom I have appointed. (Doctrine and Covenants 43:5–7)
This verse cross-references to Alma 12:9.
10 That inasmuch as ye do this, glory shall be added to the kingdom which ye have received. Inasmuch as ye do it not, it shall be taken, even that which ye have received.
(Doctrine and Covenants 43:10)
An all-time classic.
Treasure these things up in your hearts, and let the solemnities of eternity rest upon your minds.
(Doctrine and Covenants 43:34)
at April 25, 2021