This week's lesson covers revelations given to David, John and Peter Whitmer, Jr., as well as the revelation to the Three Witnesses. We'll discuss those below.
First, though, the lesson mentions the move from Harmony to Fayette. In the section of the manual shown below, the manual says "Oliver reached out to" David Whitmer because he felt that Harmony was no longer safe.
Maybe Oliver felt that way, but Lucy Mack Smith says Joseph received a revelation through the Urim and Thummim to contact David Whitmer.
I find it astonishing that the manual (as well as the Saints book and other references) omit this critical part of the history. It's inexplicable to me because the lesson quotes from Lucy Mack Smith's history several times.
One explanation could be that Lucy describes Joseph applying the Urim and Thummim to his eyes and looking on the plates. This directly contradicts the currently popular claim that Joseph used a seer stone in the hat (SITH) to translate instead of the Urim and Thummim. We have faithful LDS historians who claim Joseph didn't use the Urim and Thummim, didn't use the plates, and didn't really translate anything, but merely read words that appeared on the stone.
Whether that narrative, or some other unknown motivation, prompted the lesson manual to omit Lucy's account, I can't tell. But it is an important part of Church history so I include it below.
Here is an image from the manual. 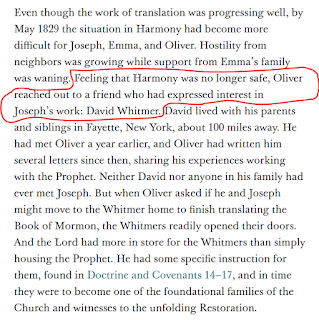 Here is what Lucy reported. 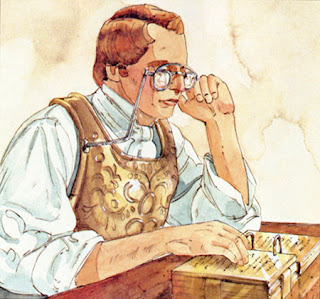